A new research project is using a precise genome-editing technology, called CRISPR-Cas9, in bovine cells to identify genes that the virus requires for replication.

Once they identify the genes, scientists could use genome-editing to alter or even remove the genes from cattle and prevent the virus from spreading.

As part of the project, funded by the UK Government’s Biotechnology and Biological Sciences Research Council, Dr Robert Dalziel of the Roslin Institute worked with the Institute’s Public Engagement team to develop an interactive schools workshop for 16-18 year olds called “Cows, Coughs and CRISPR”. 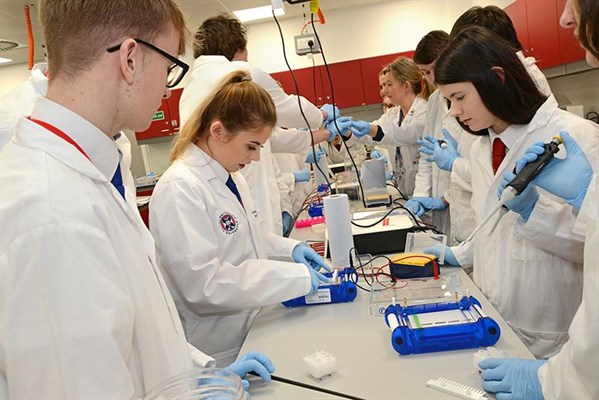 The workshop is an opportunity for pupils to get hands on with real scientific equipment and to learn about genome-editing in the Easter Bush Science Outreach Centre (EBSOC), a purpose-built engagement laboratory.

DNA analysis, which is on the school curriculum, is presented in the context of the real-world problem of disease spread on cattle farms.

The workshop also has opportunities for pupils to work alongside the scientists from Dr Dalziel’s group and discuss the ethics of using genome-editing in food production.

During the workshop, pupils are taken through the story of the bovine herpesvirus research project. They use similar techniques and are presented with the same questions that the researchers deal with on a daily basis.

It felt important to all of us that the workshop should reflect closely the actual work that was ongoing in the research group, as well as fitting in with the school curriculum. We now have a workshop aimed at Higher Biology and Advanced Higher Biology pupils that highlights the research process by providing them with a scenario and asking them, 'What would you do next?'

For the first workshop, we hosted pupils from the region where I was born, including a group from my old school. It was very important for me to get involved, to encourage young people to engage with science and to give them the belief that they can pursue a career in science.

Feedback from the workshop from pupils and teachers has been extremely positive.

Today was much more realistic than our usual science class, we don't normally hear much about what scientists are researching and how they do it. I thought it was exciting, I thoroughly enjoyed the workshop and had a great day!

All pupils surveyed said that the workshop increased their confidence in studying biotechnology and molecular biology topics and that it increased or reinforced their understanding for genetic modification.

The students seem to particularly enjoy the feeling of being an active participant in the research process by thinking about what they would do, and applying their knowledge. And it hasn’t just been the students who have benefited. I have learnt a lot from the EBSOC team in how I communicate messages to an audience whatever their age or background. I feel that the skills that I have developed will also improve the communication of my own research at conferences and other scientific events.

The team have also run this workshop for young people who are supported by the Social Mobility Foundation, a charity which aims to make a practical improvement in social mobility for young people from low-income backgrounds, with very positive feedback from all those involved.