A specific region in the genome of Nile tilapia – a key aquaculture species that is worth nearly $10 billion globally – has a major effect on mortality levels during an outbreak of Tilapia Lake Virus (TiLV), a study led by the Roslin Institute and WorldFish has found. 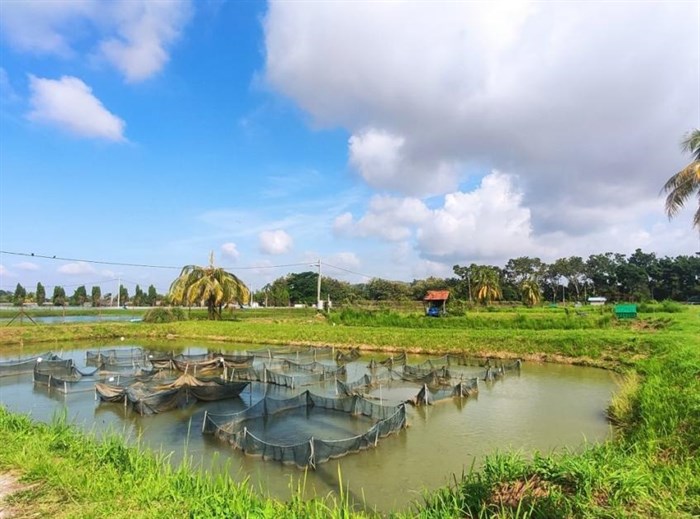 Scientists analysed the genome of almost 1,000 fish from a pond that had experienced an outbreak of
Tilapia Lake Virus. Image credit: Mahirah Mahmuddin, WorldFish

Fish with specific genetic variants in this region were substantially less likely to die in an outbreak of the virus than fish without these variants. Survival rates improved by approximately one-third, scientists observed.

By selecting parent fish for breeding based on these variants, tilapia strains with innate resistance can be developed. This will reduce the number of outbreaks and mortality rate of TiLV, which is one of the biggest threats to tilapia aquaculture, with mortalities up to 90 per cent and for which vaccines are not yet available.

Scientists analysed the genome of almost 1,000 fish from a pond that had experienced an outbreak of TiLV.

Comparing the genomes of fish that survived the outbreak with fish that did not enabled scientists to find the region in the genome containing variants associated with survival.

The average survival rate of tilapia with the favourable variants was 32 per cent higher than that of fish with none of the variants, scientists found.

The study, published in the journal Heredity, was funded by the CGIAR Research Program on Fish Agri-Food Systems (FISH) and the Biotechnology and Biological Sciences Research Council, part of UK Research and Innovation.

Tilapia Lake Virus can cause mass mortality to farmed Nile tilapia, which has major negative impacts for farmers and food security in many countries. Our results provide a clear route to selecting fish with improved genetic resistance to TiLV, with major potential to help tackle this devastating virus.

Breeders will be able to select the best candidates for resistance to Tilapia Lake Virus by marker assisted selection, generating new strains of Nile tilapia with enhanced resistance. Interestingly, we also showed that this selection won’t have any negative impact on the fish harvest weight.

This information will be invaluable in creating resilient tilapia breeds that can help maintain production of fish in the face of increasing disease risks that threaten food security in many parts of the world. WorldFish plans to incorporate TiLV resistance in the new strains of Genetically Improved Farmed Tilapia (GIFT) we are developing.

Ross Houston will be the guest speaker at MSZ Business Forum on 3rd August 2021. Find out more