The accolade was announced by the Project Management Institute, an international organisation for project management professionals, at its 50th anniversary celebrations in Philadelphia.

The research was part of experiments to develop better methods for producing genetically modified livestock, reducing the number of animals needed for research. 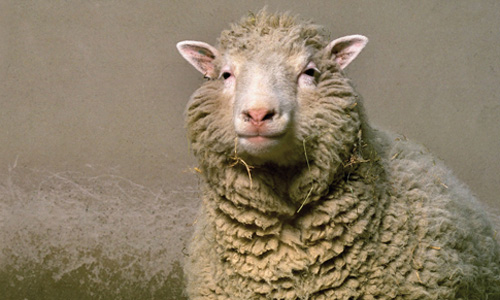 These approaches have allowed scientists to refine, reduce and replace the use of animals in research as well as improving their welfare.

Present and future research that stemmed from Dolly research:

Pigs resistant to a deadly virus
Roslin scientists have produced pigs that can resist one of the world’s most costly animal diseases. The virus infects pigs using a receptor on their cells’ surface, called CD163. Researchers used gene-editing techniques to cut out a small section of the CD163 gene. Tests with the virus ‒ called Porcine Reproductive and Respiratory Syndrome (PRRS) ‒ found the pigs do not become infected.

Chicken cells resistant to flu
Scientists have used gene-editing techniques to stop the bird flu virus from spreading in chicken cells grown in the lab. The researchers, from Imperial College London and the Roslin Institute, prevented the virus from taking hold by deleting a section of chicken DNA inside lab-grown cells. The findings raise the possibility of producing gene-edited chickens that are resistant to the disease.

Stem cells insights into African swine fever
Researchers have defined how to maintain stem cells from pigs and how to manage their differentiation into other types of cells. Pig macrophages – which ingest bacteria and cell debris –derived from stem cells were found to be a useful way to study African swine fever, as the cells mirrored the animals’ varying susceptibility to disease.

Using stem cells to investigate bacterial infection
New methods to generate masses of cells resembling miniature guts – enteroids – have been developed. Cattle enteroids have been used to show the biological mechanism of E. coli O157 infection and this is now being extended to Cryptosporidium and Salmonella.

Furthermore, Roslin scientists found that mesenchymal stem cells (MSCs) from horses naturally produce molecules that can fight bacterial infection, by acting directly on bacteria and by regulating the activity of immune cells involved in the natural body defence against microbial infection. These cells are also present in humans.

Find out more facts about Dolly the Sheep