Researchers from The Roslin Institute and the University of Chile investigated how expression of genes in salmon skin respond to infestation with sea lice, and how this varies between resistant and susceptible animals.

Sea lice have a major negative economic and animal welfare impact on salmon aquaculture globally. Previous research has shown that certain individual salmon are better able to resist infection with sea lice than others, and this is partially due to genetics. 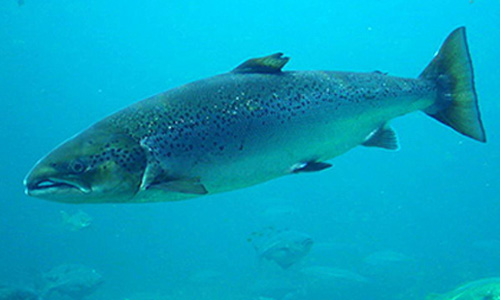 Dr Diego Robledo is a Postdoctoral Research Fellow working in Professor Ross Houston's lab at The Roslin Institute. He used RNA sequencing to study the skin transcriptome – the set of all RNA molecules produced by the cells of an organism - of Atlantic salmon parasitised with lice. He then looked for differences in gene expression between salmon with high and low resistance to lice.

The team observed that several genes responsible for immune response and pattern recognition are different between resistant and susceptible salmon. Differences are also visible with regards to myogenic and iron availability factors.

In this study, we asked the question 'How do resistant fish and susceptible fish differ in their response to sea lice infestation?' by comparing the gene expression profiles of these two groups.

The results shed light on the genes and pathways that play a role in genetic resistance, and may be useful in the future for developing new prevention or control mechanisms, including enhancing selective breeding to produce more resistant stocks.

This research was part of a project funded by the Newton Fund through the UK's Biotechnology and Biological Sciences Research Council. This is a bilateral funding initiative between Research Council UK and Chilean counterparts CONICYT. The Chilean side of the project was led by Dr José Manuel Yáñez from the University of Chile in Santiago, and was in collaboration with salmon breeding company AquaInnovo.