Ralph, a five-year-old Gordon Setter, was referred to vets with repeated nosebleeds, and tests confirmed a growth in his nose.

The tumour was affecting Ralph’s breathing, and without treatment would have proved fatal.

The family pet was the first patient to be treated at the Dick Vet using radiation therapy delivered by the most advanced machine of its type – exclusively available at the Hospital for Small Animals.

Following treatment, Ralph’s tumour has shrunk considerably, his nose bleeds have completely resolved and he is again enjoying life to the full. 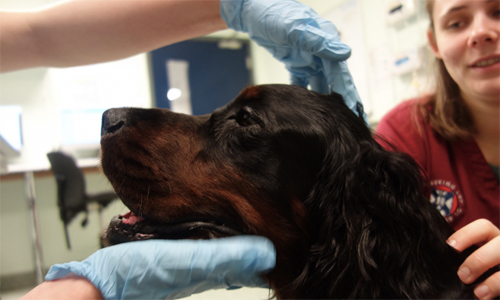 Vets treated Ralph using a recently installed linear accelerator, known as a Vital Beam. The radiotherapy beam can vary in shape and intensity and, together with sophisticated software, it can deliver radiation in a very advanced form that is normally only available in human medicine.

The radiation treatment given in this case, known as intensity-modulated radiation therapy, can deliver a precise dose of radiation to almost any tumour shape.

This allows a relatively high, targeted dose to nasal tumour such as Ralph’s, while limiting the amount of radiation that might affect nearby healthy tissue, such as the eyes, oral cavity and brain.

Radiation therapy of this type is given under general anaesthetic to ensure the animal lies still.

Targeted radiation therapy allows for flexibility in treatment; with fewer doses if necessary, to limit the time animals spend in hospital under anaesthesia. We are delighted with Ralph’s progress and hope he will enjoy a good quality of life for a long time with his loving owners.