From humble beginnings in the 1920s as the Animal Diseases Research Association based in Moredun, Edinburgh, to a major research hub today at the foot of the Pentland hills, the ethos has remained the same: to work in direct partnership with the farming community and address their needs with regards to livestock health and welfare.

This year The Moredun Group celebrate the centenary of the Moredun Foundation and everything it has achieved over the past 100 years. As part of this, Moredun are reviving a mobile laboratory and will be sharing its progress as it is being constructed.

In 1920, representatives of the Highland & Agricultural Society, the Scottish Chamber of Agriculture and the National Farmer's Union of Scotland agreed to form a new society:

A conference held three years earlier with a keynote talk on "Problems for Veterinary Research after the War" attracted over 900 delegates, highlighting the need for research into livestock diseases. And so, the Animal Diseases Research Association (ADRA) was born, the forerunner to the Moredun Research Institute

Six years later, ADRA received a donation of £1500 from its President to purchase and equip a mobile field laboratory. The aim was to use it to facilitate field investigations into livestock diseases. Power, lighting and a 14ft tent pole attached to the roof were included in the custom-made vehicle to make it easier to carry out experiments on the farm. 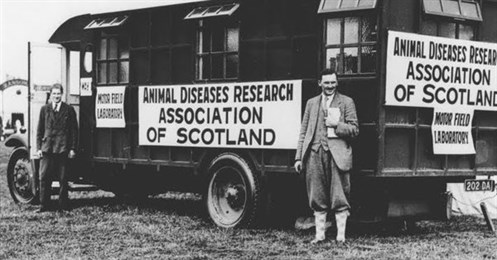 1926 was also the year that the Moredun Research Institute was officially opened on the original site in Moredun, south Edinburgh. Up until that point, ADRA had been running its science programme in rented labs at Glasgow Veterinary College.

Braxy (a fatal bacterial infection of young sheep) and lamb dysentery (an intestinal disease of newborn lambs) were major research priorities in the 1920s. Such "clostridial diseases" of sheep are caused by the bacteria clostridia which are widespread in the environment, particularly in soil. While clostridial diseases have been recognised clinically for over 200 years, it was not until the end of the 19th century that the cause began to become known.

Recognition of different clostridial disease and ways of combating them continued throughout the 20th century and was the primary reason why farmers founded ADRA. At that time, large numbers of lambs were dying from lamb dysentery with what we now know to be an infection of Clostridium perfringens type B.

The mobile laboratory made regular trips to an infected farm in Selkirk to carry out on-site investigations, while a control flock of Blackface sheep was bred and kept back at the Moredun Research Institute. The joint efforts of the team on and off-site meant that veterinary scientists were able to isolate the bacteria responsible and soon developed the first effective vaccine against the infection.

Work on other sheep clostridial diseases quickly followed, including braxy, and their associated vaccines became precursors of the commercial vaccines available today.

A new, modern mobile laboratory and outreach bus will continue the tradition of running tests on-site on farms and at events across the country.