Crop experts at Scotland’s Rural College (SRUC) say the breakfast dish is the best thing to attract the molluscs into traps, which will then allow farmers to gauge whether they need to take further action.

According to figures from the Agriculture and Horticulture Development Board (AHDB), if slugs were left totally uncontrolled, the creatures would cause annual losses of around £25 million in wheat and £18m in oilseed rape. For Scotland, these losses would equate to around £1.6m and £1m respectively.

Although slugs will not have been enjoying the dry summer, and numbers waiting to feed on autumn-sown cereals and oilseed rape will have taken a hit, growers are being warned not be complacent and assume that there will be no slug problems this autumn.

Growers can assess the risk from slugs for themselves by using slug traps following rain, or drench the area around the trap with water, as this tempts slugs up on to the soil surface at night.

To get the best from slug trapping, the bait placed under the trap needs to grab the slugs’ interest and to keep them there. Dr Andy Evans, from SRUC’s Crop and Soil Systems team, says the best option is a dry food bait such as Swiss-style muesli, or chicken feed. 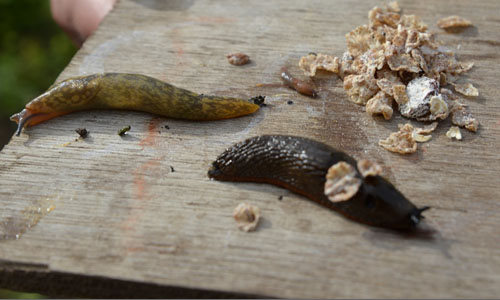 A tablespoon of the bait should be placed under the trap, which can be a slate, fertiliser bag, an upturned flower pot base, wooden board or something similar.

Traps should be checked in the morning before the day warms up too much, one to two days after being placed in the field. Farmers should consider using several traps per field so they can determine whether some areas are more ‘sluggy’ than others, and trap more than once. If slug numbers exceed five per trap, especially if conditions have been suitable for slugs to be feeding on the soil surface (damp soil and humid nights) then the following winter wheat crop is likely to be at risk from slug damage. Only one slug per trap is enough to put winter oilseed rape at risk.

“Slugs can pose a real problem for farmers so it’s important to gauge the size of the problem before taking any further action. Slug traps are an easy, cost-effective way of doing this and there’s no doubt that Swiss-style muesli is the best way to attract them.”

If there is a slug risk, growers should try to create a fine, firm seedbed for the autumn crops, as good soil cultivation can reduce the risk of slug damage, as can deeper sowing of cereal seed (3-4cm).

Some cereal seed treatments primarily used for barley yellow dwarf virus protection can provide protection from seed hollowing by slugs. As these seed treatments contain the neonicotinoid insecticide clothianidin, this autumn will be the last opportunity for these to be used before they are revoked.

NipsIT INSIDE, Deter, and Redigo Deter will protect the seed from slugs to a great extent, but damage to the shoots will still be a threat. Consequently, an application of slug pellets may still be needed to protect the shoots.

Generally, a pre-emergence application of pellets with a follow up post-emergence if damage is seen tends to do the job in both winter wheat and winter oilseed rape. However, further treatments may be necessary if the crop is slow to emerge or slug pressure is severe. The Metaldehyde Stewardship Group guidelines for the use of metaldehyde slug pellets need to be considered if intending to use metaldehyde slug pellets.

In particular, no metaldehyde pellets should be allowed to fall within a minimum of 10 metres of any field boundary or watercourse. This measure will protect birds and small mammals, and provide additional protection to prevent metaldehyde ending up in water. Ferric phosphate slug pellets are an effective alternative to metaldehyde and have no restrictions on their use.