In UK dairy herds, up to a third of cows are affected by disease or reproductive failure and need to be removed before the end of their productive life. This incurs significant costs to farmers and raises serious animal welfare issues. 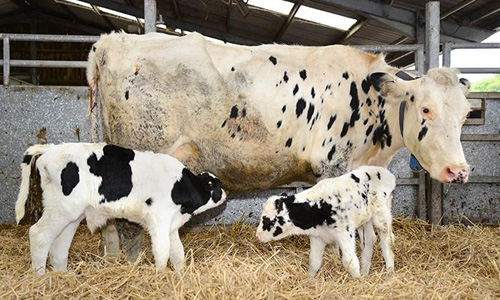 A procedure to identify early on cows that are likely to have problems later in life would be extremely beneficial for the dairy industry and would have the potential to significantly decrease animal suffering.

A study by scientists at The Roslin Institute and Scotland's Rural College (SRUC) showed that the blood levels of certain microRNAs change dramatically during early life in cows and, importantly, that some microRNAs are closely associated with the incidence of diseases such as lameness and mastitis, as well as with milk production in mature cows.

MicroRNAs are small molecules produced by all body tissues, which play important regulatory roles in animals and plants. MicroRNA levels can be readily quantified in blood using standard laboratory procedures and can be used to assess changes in the function of specific body tissues, a feature that is already being exploited for disease diagnosis in humans.

As we have already shown in previous studies, these results show that microRNAs may be very useful as diagnostic tools in dairy cows and potentially other livestock species. Specifically, we think that microRNAs could allow for selection early on of the most promising animals in a herd in order to maximise productivity and animal wellbeing.

Dr Xavier Donadeu, one of the authors of the study at The Roslin Institute

This work has been supported by SRUC funds awarded to Professor Georgios Banos and Dr Xavier Donadeu. The results are published in the journal "Scientific Reports".