The funds will be used to screen scores of existing medicines on brain cells grown in the lab. The initiative could cut years spent waiting for treatments to become available because the drugs being tested are known to be safe.

The brain cells are grown, using stem cell technology, from blood cells donated by people with MND. This means that the cells have all the characteristics of the patients’ own brain cells, including signs of their condition.

The cells are screened by automated laboratory drug testing technology, developed at the University of Edinburgh, with the hope of identifying drugs that might have beneficial effects on MND symptoms. The researchers will also test combinations of drugs, to check whether different types of medicines might have synergistic effects.

Researchers hope to prioritise promising drugs that could be fast-tracked for clinical trials.

We are extremely grateful for this investment, which will greatly accelerate our ability to discover potential treatments for MND. We’re specifically investigating drugs that are already licensed as treatments for other diseases. If we find something that looks promising, it can be taken into clinical trials far more quickly than an unlicensed drug. As well as testing individual medications, we’re looking at combination therapies as we’ve learned from cancer research that these are often more effective for fighting complex diseases such as MND. 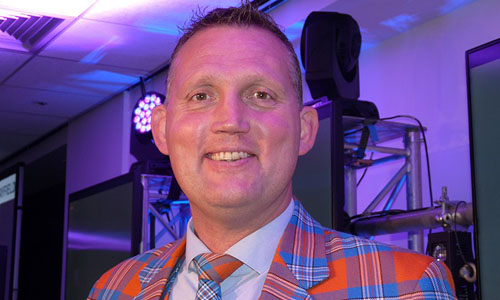 In 2017, former Scotland international rugby player Doddie Weir announced he had been diagnosed with MND and pledged to support research into the condition. The My Name’5 Doddie Foundation has subsequently invested more than half a million pounds in research projects across the UK.

My Name'5 Doddie Foundation launched with the clear aim of supporting research to help find a cure for MND. This is the second significant investment in research and we are delighted to be working with the respected Euan MacDonald Centre at the University of Edinburgh. Euan and his family have done a great deal in the fight against this devastating disease and we hope that by pledging funds to this this new initiative, we can help make a difference.

This commitment has only been possible through the incredible help and fund raising efforts of the fine people who have supported us over the past ten months. The response to my diagnosis and the launch of the Foundation has been inspiring and we will continue to do all we can to help find a cure.

We welcome this investment from the My Name’5 Doddie Foundation, which builds on the expertise we have at the Euan MacDonald Centre and lays the foundations for a strong partnership between our organisations. It will go a long way towards helping our scientists discover potential treatments for MND.