The insights will help scientists to better understand how superbugs can rapidly evolve and become increasingly antibiotic resistant.

Researchers have found a previously unknown method of genetic transduction - the process through which bacteria begin to evolve into potentially deadly superbugs. The new process has been named Lateral Transduction. 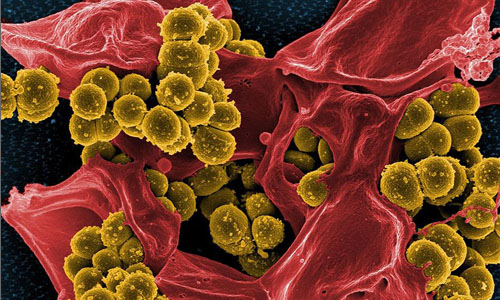 Working with the bacteria Staphylococcus aureus, scientists were able to demonstrate that this new naturally occurring method of transduction was at least one thousand times more efficient than generalised transduction, the best currently known method.

This is an incredibly exciting and significant discovery. We have been able to show a new way that bacteria evolve. With the rise of superbugs that are increasingly antibiotic resistant, the importance of understanding the mechanisms for bacterial evolution has never been so important.

Lateral transduction is an entirely natural process and we believe it also occurs in bacteria other than Staphylococcus aureus. This is a game-changer in terms of the way we understand bacterial evolution.

Bacterial transduction is a process that involves viruses infecting bacteria. As a consequence of this mechanism, bacterial DNA moves from one to another bacteria, thereby causing mutation and evolution, often producing increasingly deadly and antibiotic resistant bugs.

Lateral transduction is unique in its efficiency. The process involves so many genes being transferred, that scientists have theorised whole sections of bacterial chromosome are being mobilised to other bacteria at the same time. This could help to explain the rapid pace at which superbugs are able to evolve.

This research also challenges current scientific thinking in this area, which assumes that only mobile genetic elements, but not the bacterial chromosomes, can be transferred at high frequencies. Now scientists believe lateral transduction has the power to move whole sections of bacterial chromosome including particularly deadly sections called pathogenic islands responsible for virulence and antibiotic resistance.

Professor Ross Fitzgerald and PhD student Rodrigo Bacigalupe from The Roslin Institute at the University of Edinburgh have contributed to this research, which has been led by the University of Glasgow and the National University of Singapore. The study is published in the journal "Science". The work was funded by the Biotechnology and Biological Sciences Research Council (BBSRC), the National Medical Research Council (NMRC), the Singapore Ministry of Education (MOE) and Wellcome Trust.

This important study has revealed a novel, highly efficient method of phage transduction that has had a massive impact on the evolution of bacterial genomes. We are pleased that at The Roslin Institute we carried out the comparative genomic and transcriptional analysis that made it possible to reach these findings.