Applications to Scottish EDGE Round 15 will be accepted through the competition online portal until 4th September 2019 at 2pm, requiring a completed application and a short video pitch.

Throughout its past 14 rounds, Scottish EDGE has awarded over £14 million to startup businesses across Scotland, with an alumni roster which boasts the likes of Callum Smeaton of TV Squared, Leah Hutcheson of Appointedd, and Michael Corrigan of Trtl. 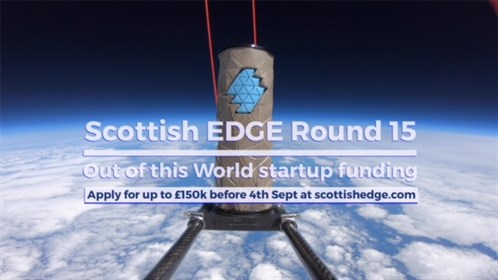 All applications submitted in Round 15 will be assessed by a number of independent, expert panels before being shortlisted to participate in a Scottish EDGE semi-final or the final of its subsidiary competition categories, namely Young EDGE or Wild Card EDGE.

Prizes of up to £150,000 will be awarded at an awards evening 4th December 2019 following the live Final, which takes place earlier the same day. Round 14 served as a reminder of Scottish EDGE’s essential role in nurturing Scotland’s globally recognised entrepreneurial talent, with a total of £1.1 million awarded in grant and loan funding to 38 of Scotland’s most promising startups.