Almost 5,000 ground-mounted panels are now being installed at Easter Bush Campus in Midlothian in a move that will save an estimated £200,000 per year in electricity costs. Installation is due to finish in November. 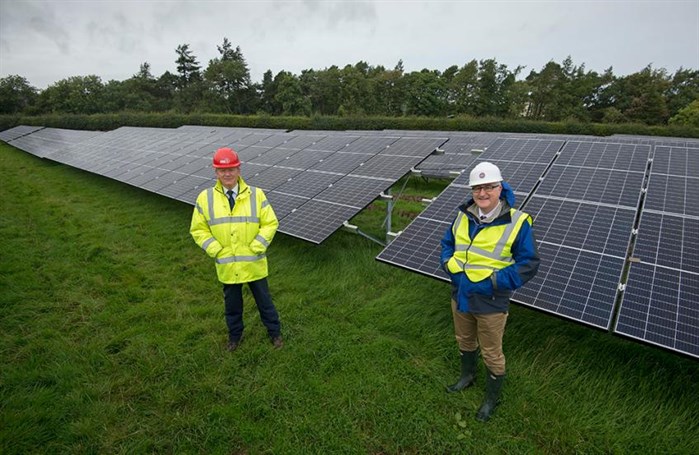 The five-hectare site – the equivalent of five football pitches – will be connected to the world-renowned Royal (Dick) School of Veterinary Studies and the Roslin Institute.

Its photovoltaic (PV) panels are expected to generate more than 1,400,000 kWh of electricity a year, which is roughly the same as that needed to supply 500 typical homes.

The solar farm – one of the first to be housed on a University campus – will provide 15 per cent of the Easter Bush site’s electricity consumption.

Together with existing generation capacity, 60 per cent of Easter Bush’s electricity, and 30 per cent of its heat, will be generated on site from low or zero-carbon technologies.

The University of Edinburgh has invested more than £20 million in low-carbon energy in recent years, which has reduced its overall CO2 emissions by almost 10,000 tonnes annually. The solar farm at Easter Bush will not only allow us to lead the way in the practical implementation of such technology, but research the next generation of low-carbon energy.”

The University of Edinburgh was an early adopter of PV technology. Its first panels were installed at its King’s Buildings campus in 2007 and have since generated nearly 1,000MWh.

In recent years, the University’s solar installations have generated an average of 265MWh of electricity annually. The new development will substantially increase that figure, to an average annual figure of 4,500 MWh, which will save more than 1,000 tonnes of carbon emissions each year.

Edinburgh’s ambition of becoming carbon neutral by 2040 represents one aspect of the University’s commitment to social and civic responsibility and to meeting the UN’s Sustainable Development Goals.