Rats emit high pitched ultrasonic vocalisations (USVs) – akin to laughter – when they are happy, which can be used to measure their ‘enjoyment’ of tickling.

In an international collaboration, researchers at Scotland’s Rural College, the University of Edinburgh and the Institut National de la Recherche Agronomique (INRA), set out to investigate if young rats can learn to associate the presence of an odour with the positive experience of being tickled. 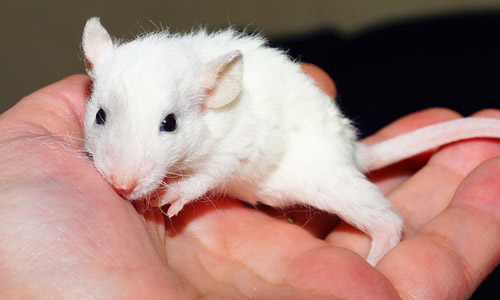 The research, published in PLOS One, found that rats exposed to a neutral odour while being tickled, emitted more USVs when subsequently exposed to the same smell without being tickled.

The research demonstrates the possibility of using positive stimuli, such as tickling, to study learning in animals.

“In this study we showed for the first time that rats can learn to associate a neutral odour with tickling as they emit more USVs when subsequently exposed to the odour (without tickling).

“This suggests that the odour is now able to produce a positive emotional state in the rats and has a number of potential applications, including the use of positive odour conditioning to ameliorate stress in domestic animals. For example, if an animal has to go through a stressful procedure, it could be presented with an odour that it had previously associated with a pleasant context.”

Alistair Lawrence, Chair of Animal Behaviour and Welfare at SRUC and the University of Edinburgh

Vincent Bombail, Research Scientist at INRA, said: “This is a novel method for positive/appetitive conditioning without the use of drug or food rewards. It is a fascinating foray into the world of positive emotions, which was enjoyable for the rats, as well as all the experimenters involved.”

The researchers exposed two groups of rats to different neutral odours (A and B). They then measured the USVs produced by the group of rats being tickled and the control group. The tickled rats produced significantly more USVs on the days they were tickled, and compared to the control rats.

In the next stage, both groups were exposed to three odours: an unknown neutral odour, extract of fox faeces, and either odours A or B. The USVs of the tickled rats increased when exposed to the odour they had previously experienced when tickled, indicating they had learned to associate the odour with a positive experience.